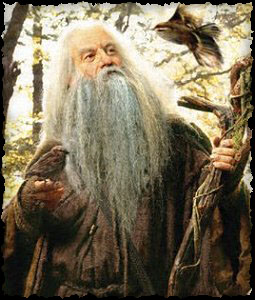 Radagast the Brown is a fictional character in J. R. R. Tolkien's Middle-earth legendarium. He is one of the Istari or Wizards who were sent by the angelic Valar to aid the Elves and Men of Middle-earth in their struggle against the Dark Lord Sauron. Radagast appears in The Lord of the Rings and Unfinished Tales, and is mentioned in The Hobbit and The Silmarillion.

Unfinished Tales explains that Radagast, like the other Wizards, came from Valinor around the year 1000 of the Third Age of Middle-earth and was one of the Maiar. His original name was Aiwendil, meaning bird-friend in Tolkien's invented language of Quenya. The Vala Yavanna forced the wizard Saruman to accept Radagast as a companion, which, Tolkien says, may have been one of the reasons Saruman was contemptuous of him, to the point of scornfully calling him "simple" and "a fool". However, he was an ally and confidant of Gandalf, who describes him in The Hobbit as his "cousin". He was also friends with the skin-changer Beorn, who deemed him to be "not a bad fellow as wizards go" and also said to Gandalf that he "used to see him [Radagast] now and again".

Radagast lived for much of his time in Middle-earth at Rhosgobel in the Vales of Anduin, on the western eaves of Mirkwood, near the Gladden Fields. He had a strong affinity for — and relationship with — wild animals, and it seemed his greatest concern was with the kelvar and olvar (flora and fauna) of Middle-earth. He was wiser than any Man in all things concerning herbs and beasts. It is said he spoke the many tongues of birds, and was a "master of shapes and changes of hue". Radagast is also described by Gandalf as "never a traveller, unless driven by great need", "a worthy Wizard", and "honest".

Radagast appears in The Silmarillion where he played a part in helping Saruman, who was a member of the White Council, which was formed to stand against Sauron (although he was not a member of the Council himself). It is mentioned that there were birds among Saruman's spies, due to Radagast lending to him his aid, though Radagast knew nothing of Saruman's treachery and believed that Saruman wished to use the birds for watching the Enemy (Sauron).

In The Fellowship of the Ring, Radagast was unwittingly used by Saruman to lure Gandalf to his tower of Orthanc, where Gandalf was captured. However, Radagast also unwittingly helped rescue him by sending Gwaihir the Eagle to Orthanc with news of the movements of Sauron's forces. When Gwaihir saw that Gandalf was imprisoned on the top of the tower he carried him off to safety before Saruman realized he was gone.

The only other reference to Radagast in The Lord of the Rings is after the Council of Elrond when it is decided to summon all the allies against Sauron together. Scouts are sent to look for help, and it is reported that Radagast is not at his home at Rhosgobel and cannot be found. Tolkien makes no mention of what has happened to Radagast, and he plays no further role in events.

Tolkien wrote that he gave up his mission as one of the Wizards by becoming too obsessed with animals and plants. Tolkien also wrote that he did not believe that Radagast's failure was as great as Saruman's and that he may eventually have been allowed (or chose) to return to the Undying Lands.

According to the essay "The Istari" from the Unfinished Tales, the name Radagast means "tender of beasts" in Adûnaic, another of Tolkien's fictional languages. In Unfinished Tales of Númenor and Middle-earth, however, Christopher Tolkien indicates that his father intended to change this derivation and bring Radagast in line with the other wizard-names, Gandalf and Saruman, by associating it with the old language of the Men of the Vales of Anduin. No alternative meaning is provided with this new association – indeed, Tolkien stated that the name was 'not now clearly interpretable.' One possible source (a somewhat unfounded conjecture) would be Old English rudu gãst, "ruddy spirit." His title of 'The Brown' is simply a reference to his earth-brown robes; each of the wizards had a cloak of a different colour.

In the real world, Radagast or Rodogast is extant as a variant of Radagaisus, the name of a Gothic warlord who led an invasion of Italy in 401. Radegast is also the name of a deity in Slavic mythology.