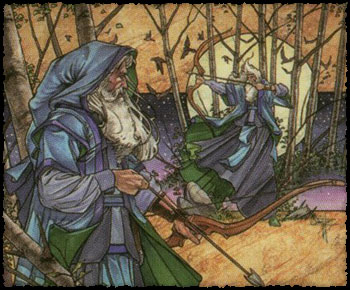 Alatar also known as Morinehtar was an Ainur and an immortal Istar wizard. He travelled to Middle-earth in the Second Age with Rómestámo, and they became the Ithryn Luin, or "Blue Wizards". They travelled to the East, to countries such as Rhûn and Khand, and to stir up rebellions against those serving Sauron. In this, they were succesful, and they later returned to Middle-earth in the Third Age and travelled East and South once again, but they never returned to the West after their journey with Saruman. It is possible that they became the founders of secret and magical cults, but their ultimate fate remains unknown. What is known is that they most likely failed, doubtless not in the same way as Saruman, and may never have returned to Aman.

"Their task was to circumvent Sauron: to bring help to the few tribes of Men that had rebelled from Melkor-worship, to stir up rebellion... and after his first fall to search out his hiding and to cause dissension and disarray among the dark East... They must have had very great influence on the history of the Second Age and Third Age in weakening and disarraying the forces of the East... who both in the Second Age and Third Age otherwise have... outnumbered the West."
- J.R.R. Tolkien.

Morinhehtar was a Maia of Oromë, the huntsman, and presumably lived in his forests on the continent of Aman, west of Middle-earth. The other servants of Oromë included Rómestámo, who was a friend of Morinehtar's, and whom he would later choose to journey with him. At some point in the Second Age, around the forging of the Rings of Power, Mohrinehtar and Rómestámo were chosen to become the first of the Istari, and were sent to the East of Middle-earth to stir up rebellion against Sauron and assist the few tribes of Men who had refused to worship Morgoth in the First Age.

"I think that they went as emissaries to distant regions, east and south, .... Missionaries to enemy occupied lands as it were. What success they had I do not know; but I fear that they failed, as Saruman did, though doubtless in different ways; and I suspect they were founders or beginners of secret cults and "magic" traditions that outlasted the fall of Sauron."
- J.R.R. Tolkien.

During the Third Age, the Valar selected Mohrinehtar (Alatar) and Rómestámo (Pallando) to be two of the five Maiar to travel from the Undying Lands to Middle-earth and serve as Istari wizards. Alatar, Curumo (Saruman) and Olórin (Gandalf) were assigned the objective of encouraging the peoples of Middle-earth to oppose Sauron. However, two more joined the original three Istari and they became five. Aiwendil (Radagast) was chosen by Yavanna to travel with Curumo, and Alatar took Pallando as a companion. Upon arrival in Middle-earth, Alatar and Pallando were dressed in robes of sea-blue. Due to this, they were called the Blue Wizards (or Ithryn Luin, in Sindarin). With Saruman, they travelled east in an attempt to help free the last Men of Númenor, who were now Haradrim and Easterlings. Later, Saruman came back to the west alone. However, Alatar and Pallando were never seen again, and their ultimate fate, and whether or not they failed their mission, is unknown.

When Alatar came to Middle-earth, he was clothed in flesh and had the appearance of a wizened old man, though he did not look as old as Gandalf. He, with Pallando, was dressed in robes of sea-blue, which was why they were named "the Blue Wizards", and had a white beard which was not as long as neither Gandalf nor Saruman's. He carried a staff, as did the other Istari, which he could use to channel his magic.

Alatar probably means "after-comer" (as he was the last of the original three Maiar to be chosen to become Istari).

J.R.R. Tolkien specifically stated that neither Alatar nor Pallando had a name in the West of Middle-earth, unlike the other three Istari (who all had two names). Therefore, Tolkien probably intended "Alatar" to be more of a title or a description than a name.

Later in his life, Tolkien wrote a note, suggesting that the names of the Blue Wizards were Morinehtar and Rómestámo. It is not clear whether these names were intended to replace the names Alatar and Pallando, or whether Morinehtar and Rómestámo were alternate names for the Blue Wizards, possibly those given to them by the peoples of Middle-earth.